4 October 2017: Sponsored by The Keltbray Foundation, Keltbray Rail’s Head of Rail, Mark Carroll, and Operations Manager, Bill Peak, recently travelled to Malawi to provide engineering support and complete the ‘Bridge to Kapeya’ which was washed away during floods earlier this year. This week the bridge officially opened.

Restoration of the bridge was vital to restore the community’s basic quality of life at Smile Malawi Children’s Orphanage. Smile is a charity that was founded and is run by well-known Kent based railway Civil Engineer Elspeth Baecke. It currently houses 37 children from the age of 3 to 19, many orphaned by the death of parents and relatives due to illness and disease including HIV/Aids, which is particularly prevalent in Malawi.

Mark explained: “Elspeth Baecke is a structures engineer for Crossrail and industry colleague and friend who founded the Smile Malawi Children’s Orphanage in 2003, after seeing an item on BBC Comic Relief about the plight of orphans in Malawi. Sadly it is estimated there are now over one million orphaned children in Malawi. 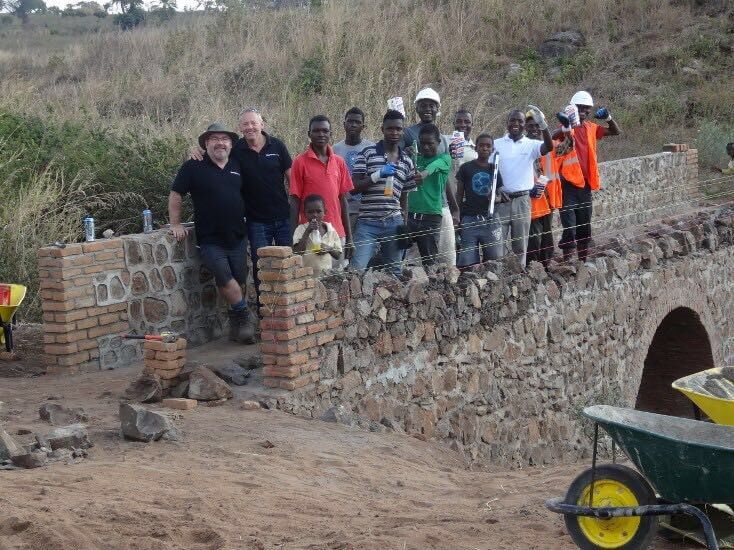 “During outreach work by the Orphanage, the local chief had asked Elspeth if anything could be done about the footbridge, which had collapsed during flooding. This had linked the local rural conurbation to the village and been vital for people to carry food and firewood etc. across. The alternative during dry season involved a climb up and down a steep ravine, often by women carrying heavy goods, and sometimes with babies and small children in back slings. In the wet season, the route was impassable, causing a 3km detour to already long walking journeys in severe heat.

Elspeth designed a simple brick arch and stone footbridge, which could be built from locally sourced materials and constructed under the guidance of engineering and construction staff from the UK, with the help of crowdfunding and donations by the Railway Civil Engineers Association. See here for bridge design: Bridge To Kapeya Design

“The four engineers from Network Rail and the final two from Keltbray, who finished the main structure completely, have done a fantastic effort. I have worked with Mark and Bill for over 30 years on the railway, and I was thrilled when they offered to go out there as they are experts in site works in tight timescales. The completed bridge has now been officially opened.”

On arrival to Blantyre airport, Mark and Bill were taken aback by the obvious poverty (Malawi is the 6th poorest country in the world). It was a significant contrast to the photographs they had seen of the orphanage, with its order and well-kept gardens.

“When we followed in the footsteps of industry colleagues from Network Rail and Transport for London to work on this bridge, work was required to install drainage, waterproof and infill, build parapet walling and safely remove the heavy timber temporary works used to form the brick arch. On realising we could take up to 64kg of luggage, we also issued an appeal to our Keltbray colleagues, as well as to family and friends, and ended up taking a large quantity of clothing for the children. We also took a full children’s football kit courtesy of Tunbridge Wells Foresters FC, in addition to balls and pumps, some hand tools and PPE,” explained Mark.

“After giving the kids their new football kits we got down to work. Over the six days we were there, we achieved all we had set out to achieve, despite challenging conditions, including the heat, (40 degrees Celsius at times), dust, three-day power cut, language barriers, safety issues, lack of tools and equipment and the threat of theft of anything left on site overnight and breakdown and loss of the only site vehicle.

“The experience was humbling and rewarding, with time spent in the evening after work having fun with the kids, including an impromptu Michael Jackson party outside our hut when the children realised we still had music during the power cut. We watched the kids play football, listened to them sing and involved the children in the work we were doing. We showed them how we were recording images and storing them on our laptop and tutored aspiring young engineers by helping them with their studies etc.

“We also tutored local workers in construction techniques and used simple safety techniques to minimise risk on site where possible. For example, we insisted that the infilling was completed as early as possible to provide a safer working environment, supervised the removal of the cantering, removed hazards and provided some basic PPE for workers, gloves in particular.

“We learnt a lot about the challenges the local people face, and how direct funding and charitable provision of staff as provided by Keltbray Foundation can have a major local impact, without the risk of aid being misappropriated. We also learnt a lot about how further works can be improved to increase productivity and reduce risk, and how local labour and materials can be further used to improve infrastructure.

“It was hard leaving the children, particularly the 10-14 year old boys who are in need of fatherly support and had spent a lot of time with us. We will both continue to support this charity, and hope it may again see the excellent support that was provided by the Keltbray Foundation,” Mark concluded.

Watch a time lapse on the bridge construction:

For more information about the Smile Orphanage and how to get involved, see Smile Malawi

For more information, please contact Keltbray’s head of communications, Marit Meyer-Bell, on tel. 0786 765 3392 or by email to [email protected]

Keltbray Group
Keltbray Group is a UK leading specialist business, which offers engineering, construction, demolition, decommissioning, remediation, rail, environmental services and reinforced concrete frame solutions. The company dates back to 1976, employs more than 1,500 people, and is a key player in developing and maintaining Britain’s built environment. Keltbray provides services to meet the needs of diverse and complex projects, and its well qualified people take pride in delivering projects safely and efficiently, on time and to budget, and with care for the environment and our communities. Keltbray has contributed to a range of high profile construction projects including The Shard, Queen Elizabeth Olympic Park Stadium, St Pancras International, Crossrail, Earls Court and Battersea Power Station.

Keltbray, a leading UK specialist engineering business, today announces it has been awarded a £10m renewables contract to deliver the design and…