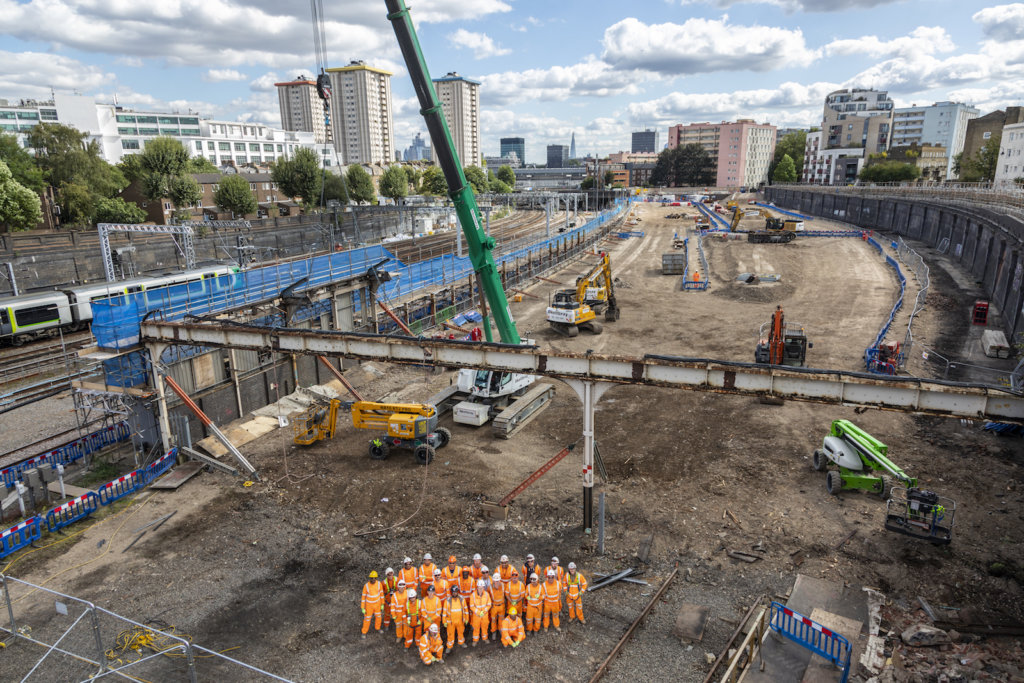 Keltbray successfully dismantled the former 250m structure known as the DB Cargo Sheds so that the site for the new approach tunnels at the London end of the high-speed line, which can now be seen in full. Overall these works took nine months and their completion marked one of the first major milestones for HS2 in 2018.

For the demolition works to be completed on the site, which is located next to the West Coast Main Line, specialist teams were required who were able to use drone technology to examine the interior of the Victorian carriage sheds before dismantling the fragile roof. The project required the removal of more than 7,000 glazing panels. Cranes were required to remove 27 steel trusses, all 50 metres in length, which had supported the carriage shed ceiling. The shed had not been in use for more than a decade and was in a very dilapidated state at the commencement of the works.

The clearance of the buildings to the west of the existing Euston station revealed, for the first time, the full scale of the area required for the construction of the future platforms concourse that will be built as part of Britain’s new High Speed 2 rail project.

The six month demolition of the former Ibis hotel on Cardington Street was completed in May 2019 and involved the painstaking demolition of the 5-storey, 380-room building. Almost 9,000 tonnes of material was generated, with over 95% of which was recycled or reused on site.

The clearance of the adjacent disused National Temperance Hospital buildings was delivered in two stages, with the second half, the Insull wing, being completed in early 2019. Two time capsules, discovered during the work, are being conserved by HS2’s archaeological sub-contractors and will be kept for future study and display in the community. The hospital, which closed in 1990, was the first institution to end the routine use of alcohol in medicine.

“The demolition of the old carriage sheds marks an important step forward for the project, clearing the way for the start of construction works next year, and the delivery of one of the most exciting new stations on the HS2 route. I’d like to congratulate the team on a job well done and look forward to moving ahead to the next stage of the project.

Across the capital we are making strong progress, with our pioneering archaeological programme in full swing and more than two thirds of demolitions now complete. I’d like to thank all those involved in helping us hit this latest milestone and I look forward to the next steps in delivering HS2’s new gateway to the capital.”

Peter Jones, Programme Director of CSJV, the contractor that performed the demolition works with Keltbray, said:

“The CSJV team, consisting of people employed from the local area and other experienced professionals, alongside Keltbray, have worked carefully and efficiently to ensure that this structure has been demolished safely. It marks a great milestone in the construction of HS2 and shows the fantastic progress that we are making in Euston and across Area South.”

Once complete, HS2 will more than double rail seating capacity out of Euston during peak hours, with the first of 11 new 400-metre platforms built adjacent to the existing station to reduce disruption to passengers during construction.