The Hunterston site is situated immediately south of Fairlie on the Ayrshire west coast. One very large Wind Turbine and associated Metrological Mast remained on the site and scheduled for demolition by SSE following clearance of other structures progressively over the years. 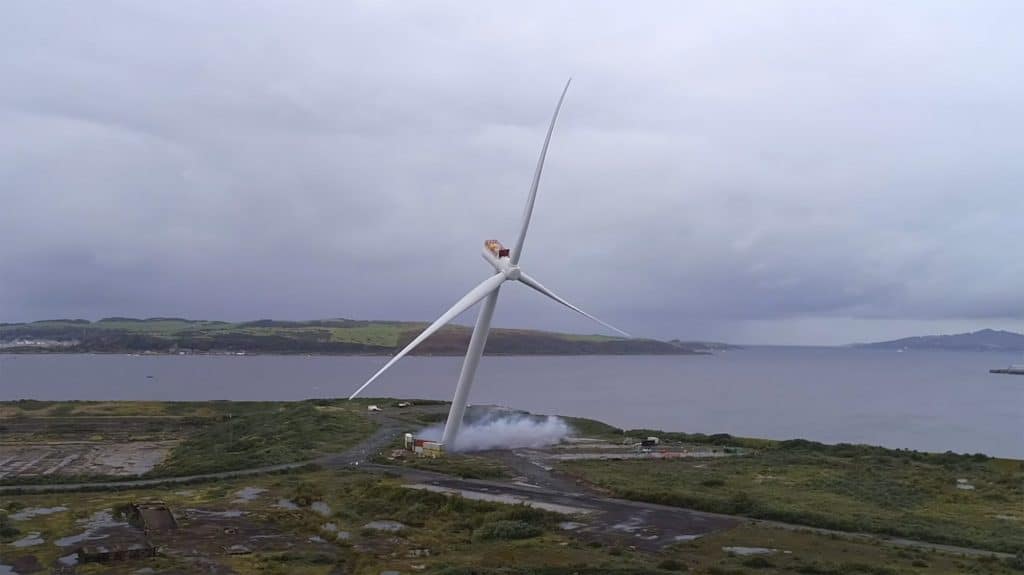 The Hunterston site is situated immediately south of Fairlie on the Ayrshire west coast. One very large Wind Turbine and associated Metrological Mast remained on the site and scheduled for demolition by SSE following clearance of other structures progressively over the years. The wind turbine was bigger than most onshore turbines, being in fact an offshore turbine built on the site as a test facility, with the following impressive statistics:

At 177 metres to the tip of the blades at the highest point, the wind turbine was a very visible navigation reference for sailors in the Firth of Clyde Estuary. It had however come to the end of its experimental life.

Although outwardly relatively isolated, the site and demolition proposals had two major constraints to deal with:

Keltbray Decommissioning was appointed by SSE as Principal Designer and Principal Contractor for the project. Following comparative risk assessment analysis, the use of explosives proved to be the safest demolition methodology for both structures.

Specialist companies were drafted in to the Decommissioning team:

The demolition proposal for the wind turbine was to cut out a birdsmouth wedge from the circular steel tower and replace for temporary stability with large steel columns. Calculations were prepared to prove that on LSC blasting of the replacement columns, the remaining heel section of the tower would fail – resulting in a controlled rotational collapse.

The met mast was of triangular form in plan. The proposal for this was to blast out the front leg to initiate rotation about the remaining two rear legs.

With all stakeholder approvals in place, and a Police Scotland Sea Patrol vessel keeping the Clyde Estuary 750 metre Exclusion Zone clear of all shipping and other vessels, the demolition took place on the morning of 26th September 2019.

The demolition was a success, both structures falling as designed, with the relatively strong cross wind causing the turbine to deviate by no more than two degrees from the planned alignment, well within the normal design parameters of plus or minus 10 degrees. A relatively soft landing was achieved with the blades breaking up and debris spread limited. Inspection of the column stubs confirmed the LSCs had performed as designed by CDI. The site successfully returned to SSE in early in December after all materials had been processed and removed.

It is worth noting that Keltbray Decommissioning’s risk-based approach on wind turbine projects has yielded three different methodologies to date – pulling, blasting and dismantling – with each project assessed on its individual merits. On this occasion blasting was used, resulting in a reduction in workforce risk by a factor in excess of 3 when compared to crane dismantling.