Northumberland Energy Park is part of Energy Central, the UK’s unique port-based service, investment and growth cluster for companies operating in the offshore energy and subsea markets. Energy Central is a partnership between Advance Northumberland, Port of Blyth, Northumberland County Council and the Offshore Renewable Energy (ORE) Catapult. It offers nearly 200 HA of strategic, quay linked development sites. The new dock, which is being funded by a £32 million public sector investment is an extension of the current dock facilities – and work is set to be completed on the project by May 2021. 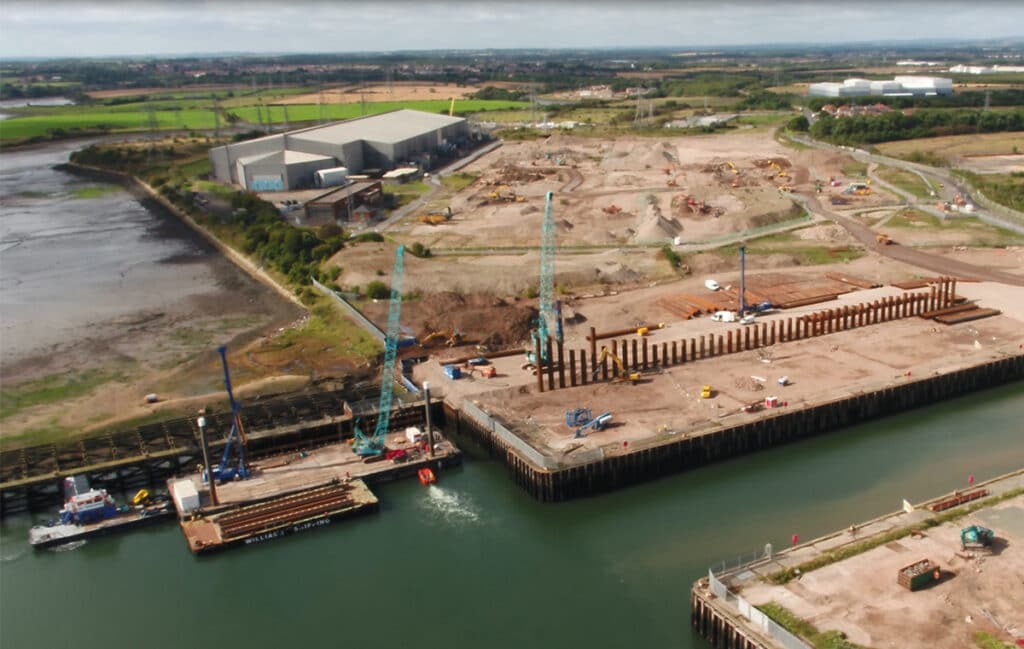 Keltbray Remediation was appointed for the remediation of the old Blyth Power station site (36 HA) including breakout and excavation of relic concrete structures and obstructions across the site and a significant earthworks cut and fill exercise. All associated chemical and geotechnical testing required to support the remediation works/strategy has been managed by Keltbray.

Keltbray’s package of works also includes the demolition of the existing Western dock wall and excavation of the old Ash Barge Dock area (which itself also contains numerous deep relic concrete structures) to form the new wider dock footprint. As part of the dock works, Keltbray have also undertaken numerous marine fill activities (both permanent and temporary works) to support the PC’s piling activities and as part of the new dock layout.

Keltbray were also contracted to install a network of temporary and permanent drainage across the site, along with the reinstatement of three existing outfalls and supporting investigatory works for the historical networks.

The dock demolition is the most technically challenging element of the project. Farrans has installed a piled closure wall across the mouth of the existing dock to enable dewatering of the existing dock, this will facilitate the demolition of the existing Western dock wall and Ash Barge dock footprint between the existing and new dock wall, which is sat circa 50m to the West of the original wall (circa 7000m2 of area to be reduced 15m form wider dock). The existing quay walls are also approaching 100 years old, so consideration must be given to maintaining the stability of these walls, particularly as water levels in the dock are reduced, as their load capacity may have been reduced through corrosion etc. over their working life.

Once the dewatering is complete and any water ingress controlled, Keltbray will begin the demolition of the existing Western dock area (Ash Barge Dock) and existing sheet pile quay wall.

The demolition itself involves an excavation 15m deep which contains a number of substantial concrete structures, some down to bedrock, which were part of the old power station works. These are to be broken out as Keltbray progresses with the excavation. The existing West quay sheet pile wall is also be removed as we progress. In total, there will be around 100000m3 of material to be excavated, processed and stockpiled on site.

Due to the depth of the excavation and the fact Keltbray is working in a de-watered tidal environment, there is a specific sequence of works to ensure the existing wall remains stable throughout.

Working with the principal/piling contractor, Keltbray worked together to agree a safe sequence of works ensuring that the Western dock demolition/excavation levels progress behind the gradual reduction in water level of the dock, to ensure both stability of the new piled closure wall, the existing quay walls and ensuring our excavation footprint remains dry.

Along with this, there is a series of tilt monitors and engineering targets set up on both the new and existing pile walls, with constant monitoring done by tiltmeter and both Farrans and Keltbray carrying out secondary manual checks on the targets. Both parties are monitoring so results can be correlated as well as providing an additional safety factor should there be any error with either parties’ monitoring equipment. This information is supplied to the Principal Designer on a live feed so any issues or excessive movement can be picked up instantly, and works ceased as per the agreed emergency plan for the works.

Following completion of the dock closure wall, the principal designer carried out a 24 hour monitoring period of wall movement with the tides to carry out a full analysis against the design before giving confirmation that Keltbray could proceed with the demolition. This has been successful and works are now underway with the dewatering of the existing dock now being maintained by a series of marine water pumps (by Farrans).

Keltbray have made good use of innovative drone surveying techniques to track and monitor cut and fill volumes throughout the lifecycle of the project. This has allowed us to accurately track progress, confirm site levels and manage the materials balance for the project. The secondary photographs and video captured by the drone has also proved useful for commercial purposes and to provide excellent marketing/promotional images for Keltbray and the client.

Keltbray also undertook the excavation for the installation of tie rods and backfilling of tie rods – material to be provided from the remediation works. In addition to this, Keltbray were to provide material for and install support beams to the existing east dock wall, the existing north dock wall and the temporary dock closure wall. The monitoring of the dock wall is being done by Farrans.