During the early stages of redevelopment of a large MoD facility in Worthy Down, Asbestos Containing Materials (ACM) were identified in soils in widespread locations across the site. Given the sensitivity of end-use, a Remediation Strategy was developed that effectively comprised a zero tolerance approach to residual ACMs in soils at site. 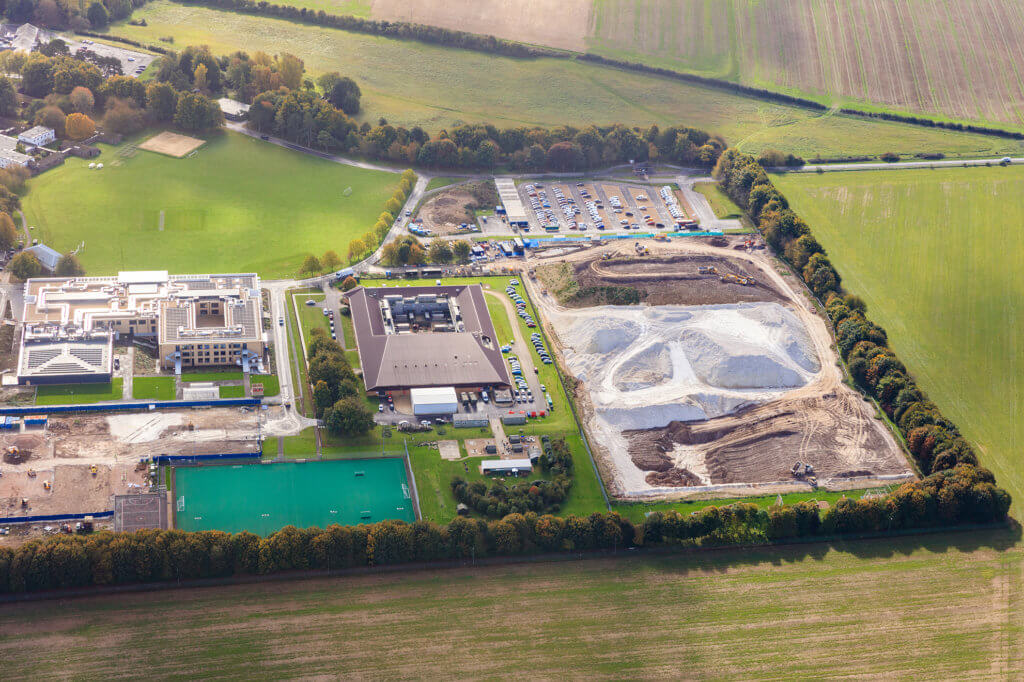 Furthermore, as part of the redevelopment, significant new service installation and infrastructure works were necessary which required specialist groundwork / utilities contractors to ‘follow on’ and work within clean service runs to mitigate any residual risk to contractors and site users. Keltbray was appointed following a two-stage tender process which required significant evidence of our in-house capabilities in relation to contaminated land and ACM in soils management.

Keltbray produced two critical design documents to allow the works to progress in a safe manner; an Asbestos Management Plan (AMP) and a Materials Management Plan (MMP) that allows on-site re-use of site-won soils.  The over-arching approach was to excavate clean chalk material from the existing sports pitch area and replace these soils with Made Ground excavated from the development site and service run footprints.  The works required significant coordination with other trade contractors and Keltbray adopted sitewide responsibility for all ACM related activity.  A variety of ACM were identified, resulting in the requirement for an element of Licensed ACM removal (under full ASB5 Notification).  Demarcation layers and abrading layers were placed upon the completed formation levels across the site to allow unconstrained access and onward use.

In total, approximately 90,000m3 of ACM contaminated Made Ground and chalk was excavated under controlled conditions, transported through a live MoD facility and placed and compacted in accordance with the performance specification.  All excavations had to be managed from water infiltration from precipitation and groundwater ingress within deep excavations to accommodate the ACM contaminated soils. All services locations were cleared by Keltbray.

Given the highly sensitive end-use and operational nature of the site, the works represented a dual challenge of managing the actual and perceived risks, as well as delivering a large scale earthworks project safely on an operational and busy ‘live’ site.  The works were assessed to be initially Notifiable Non-Licensed and a detailed Asbestos Management Plan was produced and implemented on site, including a number of control measures as follows: Physical demarcation of ACM contaminated areas; Ongoing watching brief and operative health surveillance; and Licensing of certain activities and modified 4-stage clearance protocols, Dust suppression of disturbed soils including Reassurance air testing and Plant decontamination protocols and handover.