Crossrail: What the Industry Must Take Away

The Crossrail scheme may have given Keltbray yet another reason to invest in innovation and training but there is much that the leadership team behind Europe’s biggest infrastructure project hopes the industry as a whole will take on board once it’s complete. We spoke to Chris Sexton, Deputy CEO of Crossrail, to get the inside track on the extent of the Learning Legacy and Innovation Programmes that have been set up.

Once complete, Crossrail will be used by as many as 200 million passengers every year. It’s also estimated that over 130 million working hours have been completed so far on its construction. “At peak, there’s probably at least 15,000 actively employed in building Crossrail, including Crossrail staff and our supply chain, but I think that figure probably doesn’t do it justice because of the many, many more who have contributed to this project in areas such as the manufacturing of components in the railway,” he says.

It’s understandable that so many people will have played a role in creating Crossrail so far but what is a surprise is how many are young apprentices. In fact, via the founding of a CPD training facility called the Tunnelling and Underground Construction Academy (TUCA), they’ve employed over 1,000 apprentices. This is impressive given that the initial target was 400. “I think young people do want to join the industry. I think it’s a matter of creating the opportunity for them to do that. We have now enrolled 15,000 students on courses of some sort at TUCA.” This is certainly a positive step forward in addressing future skills shortages in the industry. 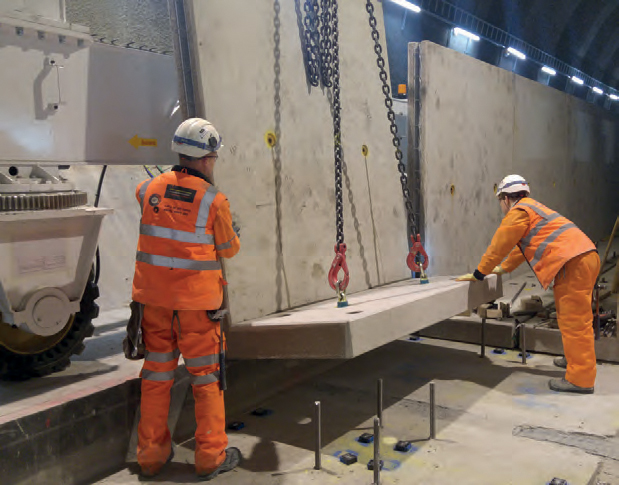 But the training and recruitment of young people is just one of the things that Crossrail will be leaving behind as part of its legacy to Britain and construction.

Innovate 18 is Crossrail’s innovation programme, looking at three principle areas: safety, sustainability and productivity. He comments, “As far as I’m aware, Crossrail is the first major project to have had its own in-house innovation program and it was a collaborative undertaking between us and our supply chain, so we put some money in and participating partners put money in as well.”

“The way that Innovate18 worked was that anybody could put an idea forward. And then it would be developed with the team and we had a collaborative working agreement with Imperial College London’s Innovations department as well. We operated a sort of triage process, whereby we decided which innovations we were going to move forward, which ones we didn’t think were going to run and which ones we would bank for some time in the future.

“I think in terms of the areas where we have been most innovative is probably in building a digital railway through the development of BIM.” This is the use of design models and asset information for more efficient construction and more cost-efficient operations and maintenance. He continued, “As an example of innovations which we have used, probably at the moment the best example for productivity is the extensive use of robotics in the fitting out of the railway systems in the tunnels. In sustainability we looked at but finally didn’t adopt the use of ground source heat pump technology in cooling the tunnels the trains go through. They would have then been warmed up by the trains moving to and fro as they generated heat, and then that hot water would be pumped back to the surface and used for heating buildings as well as by pumping the water away you’re also cooling the tunnels. So you solve two things. Now, we were not able to develop that technology in time, but that’s a good example of where our innovation programmme took something, developed it fully, and we can now hand that on to the next major tunnel project as it’s all wrapped up, packaged, and they can just take it forward in there.”

So successful has this programme been, in fact, that a new team has been created to encourage innovation for all sectors within Infrastructure under the name of i3P.

But just what should we as an industry be doing to help maintain positive change?

“But just what should our industry be doing to help maintain positive change. The second is adoption of the whole life-value of a project, in both procuring projects and in their design. So it’s not just considering the capital project and the operation and decommissioning costs as separate activities. It’s procurement and project planning and considering the whole life cost of the project.

Chris then moves on to the subject of manufacturing and safety for his final instruction to the industry, stating that he’d like to see “the increased use
of offsite manufacturing of components so that construction becomes a process of assembly onsite to the greatest extent possible and that assembly offsite makes the maximum use of robotics because the impact of that will be it will be much safer, and you get a much higher quality product because the parts would have been made with factory levels of quality and accuracy. What’s more, it will also reduce the amount of time onsite which will, in turn, reduce the impact on local communities.”

Keltbray has published its Sustainability Strategy 2022, covering the Group’s goals in supporting the United Nations’ (UN) 2030 Agenda for Sustainable Development…

Michael Allen is a Senior CAD Technician with Wentworth House Partnership (WHP), he recently received recognition as an Engineering Technician (EngTech). This…